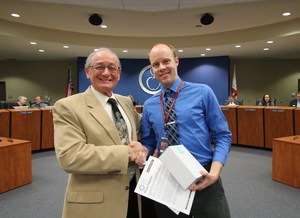 The Governing Board of the Hemet Unified School District, on nomination by Trustee Ross Valenzuela, has selected Timm Hannem, Student Body Activities Assistant at West Valley High School, as the March recipient of the Governing Board Recognition and Award.

For outstanding performance, professionalism and loyalty to the Hemet Unified School District, President Ross Valenzuela presented Timm Hannem with the Governing Board Recognition of Excellence Award and a $500 certificate to be used toward the District program of his choice.