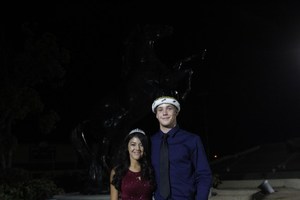 West Valley had its homecoming festivities on September 30th and October 1st.

West Valley High School had its homecoming festivities on Friday and Saturday, September 30th and October 1st. This year’s theme was Grease, the Musical.

Friday night, West Valley’s football team hosted Rubidoux High School for the Homecoming game. The game was close and both teams played hard, unfortunately West Valley was defeated in a 17-14 loss. Coach Willard said the team played a strong game against an undefeated team. He continued to say they played hard and right, and win or lose he is always proud of their efforts and the men they are becoming. At the half time show, the four nominees stood on stage as the new Homecoming Queen, Edith Torres, was announced.

On Saturday, over 400 students attended the 50’s style homecoming dance. Principal Janice Jones said, “It was great to see our students enjoy each other’s company in the great setting of West Valley.”