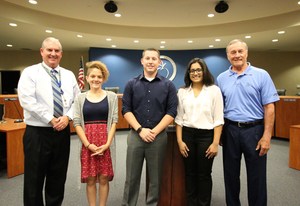 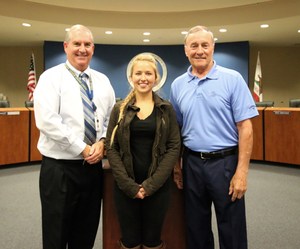 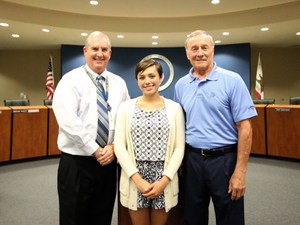 In order to be eligible for the scholarship, students needed a minimum grade point average (GPA) of 3.0 and a Free Application for Federal Student Aid (FAFSA) score in the intermediate range. These criteria were set to award students who are generally overlooked for funding.  Students received a $5,000 scholarship if they attended a comprehensive high school and a $500 scholarship was awarded to students from alternative school sites.

Haylee Marshall from Alessandro Continuation High School was selected to receive a HEF scholarship. She started attending Alessandro last year because she had fallen behind on credits. Once Haylee got to school, she worked tirelessly with staff to form a plan to graduate on time. She attended Adult Education, Friday School, worked for extra credit in her classes, and attended job and college fairs in order to stick to her plan. Her hard work paid off and she was able to graduate early. Marshall will attend Mt. San Jacinto College to pursue a career in psychology, anthropology, or sociology.

Kassidy Babcock was chosen to receive a HEF scholarship for Hamilton High School. Kassidy is highly involved in her school and manages a high grade point average. Kassidy is the Vice President of the associated student body (ASB) at Hamilton, and is an active athlete with the school’s volleyball, basketball, and softball teams. Kassidy will be attending California State University San Marcos to pursue a nursing career.

Tyler Powell was chosen as the Hemet High student to receive a HEF scholarship. Tyler will attend University of California, Irvine for his aerospace engineering degree and attend University of California Los Angeles’s (UCLA) Air Force Reserve Officer Training Corps program. In addition to attending these colleges, he plans to continue his flight training at the French Valley Airport in Murrieta where he already earned his private pilot certificate.

Keely Watland from Tahquitz High School was also chosen to receive a HEF scholarship. Keely is active in Yearbook, athletics, band, and is a cross-age tutor. Her dual enrollment and AP classes kept her busy, but she still managed a 4.27 GPA. She plans to attend UCLA to pursue a career in environmental engineering.

West Valley High School’s scholarship committee chose Astha Patel. She has participated in tennis, the South Asian Student Union, Link Crew, and Mustang Maniacs. She is the Salutatorian for West Valley with a GPA of 4.09 and achieved a 2140 on her SATs. She will be attending UCLA to pursue a degree in biology or dentistry.

The Hemet Education Foundation was formed in 1978 as a support group for the Hemet Unified School District. Over the years the Foundation has given financial support to libraries and fine arts programs. This is the second year HEF awarded scholarships to graduating Hemet Unified students. Last year students were chosen from the four comprehensive high schools (Hemet High, Hamilton, West Valley, and Tahquitz). This year the Foundation was able to add additional scholarships for students attending alternative high schools (Alessandro, Helen Hunt Jackson College Prep, and ASPIRE).

Thank you to the Hemet Education Foundation and its members: