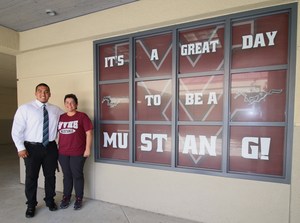 Markus Cordova, West Valley High School alumni, had an article published about him after saving a gentleman’s life. Marcus appeared in The Mesa Press, an independent student news site of San Diego Mesa College, on April 14, 2016.

On April 1, Markus went to dinner with his parents at Hemet’s local Steer N Stein restaurant. Markus heard the sound of utensils falling and a commotion behind him. Once Markus came face-to-face with the gentleman he knew something was wrong. Markus said the man’s pupils were dilated and he was unable to inhale. He asked the man if he was able to swallow or breathe; the man shook his head and Markus jumped into action. After three pumps of the Heimlich maneuver, the food became dislodged and he was able to breathe again.

“I didn’t think about it, I just reacted,” he said after recalling the incident. He admitted he was nervous, but knew he had to help.

“He is a great kid and exemplifies why West Valley High School staff and community work so hard everyday towards ensuring the success of our students,” said West Valley’s Athletic Director Kathleen Alvarez. She described Markus as a dedicated student and tremendous athlete. While attending West Valley, Markus made First Team All League, was West Valley’s CIF Athlete of the Year, was varsity captain in three sports (football, basketball, and baseball), and was the Spirit Commissioner for Associated Student Body (ASB).

Markus is working to become a Special Education teacher and athletic coach. He attended a teaching program in San Diego and was paired with a student who had a learning disability, dyslexia. He enjoyed spending time with the student and said the interaction made him see things through a different perspective.

Markus said he is enjoying his time at San Diego Mesa College. He is currently the outside/inside linebacker for the school’s football team. He said education is his main focus though, calling it a privilege to play, not a right. “You have to put in a lot of hard work for your education, and if you are lucky, you can play a sport and do what you love.”

Thank you Markus for jumping into action when you were needed. We are proud to have you as a West Valley High School alumni. “It’s a great day to be a Mustang!”