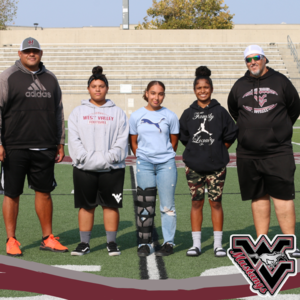 West Valley has three females starting for their football teams.

As football competitors line up on the fifty-yard line in the first drive against West Valley, they may see some unexpected players. Vanessa Ledbetter and Ciara Green will be two of the three female football players West Valley has rostered this season.


Vanessa, the veteran football player, played last year and was West Valley’s first female football player. She helped pave the way for other females to try out for the team. West Valley currently has three females on their football team, one of which was injured in a tournament over the summer and is out for the season.


Vanessa Ledbetter (11th grade), Ciara Green (10th grade), and Lyric Jones (10th grade) were all inspired by their brothers to pursue football. Vanessa recalls watching her younger brother’s football practice for a youth league. She said she would be running the same drills as the football players on the sideline and asked her mom if she could join. Her mom talked to her about possibly cheerleading instead, but Vanessa knew her passion was to pursue football. She said football has been a great outlet for her to get her aggression out as well as break stereotypes.


Between the three females, they fill five positions. Ledbetter is a right guard; Jones is a receiver and safety; and Green is a receiver, corner, and running back. Currently, Jones is out due to an ACL injury she received in a tournament over the summer. Both Jones and Green were starters for both of the school’s freshman/sophomore (Frosh/Soph) and varsity teams. Green has had three touchdowns this year and is the first female to carry the football for West Valley during a game.


West Valley coaches say watching the girls play has been inspiring. Coach Brent Perez described his three athletes as fearless, stating that it is special to see them compete in a predominantly male sport.


The three girls laughed when they described the reactions they had received from other teams they were competing against. West Valley players weren’t really sure what to expect when the girls suited up over the summer, but the coaches and the girls stated they are no longer holding back and are treated the same as their male counterparts.


West Valley football team’s standing is currently 3-1. Good luck to the team in their upcoming games!